Voroshilovsky Bridge across the Don River 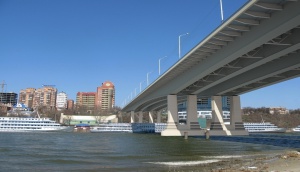 
Reconstruction of the Don crossing including a non-standard bridge on the alignment of Voroshilovsky Prospect in Rostov-on-Don: the existing 624 m-long bridge which was built in 1965 is now in emergency condition and does not meet up-to-date traffic requirements of Rostov agglomeration. The river span is only 132 m, which restricts navigation.

Main technical parameters (after reconstruction):
– length of the river crossing: 623 m
– central span: 156 m
– lanes:  3+3.
After the reconstruction the bridge will have two separate decks for each traffic direction.

The works will be carried out in 2 stages: firstly, a new (upstream) part will be built and then the old deck will be rehabilitated. This will exclude a full closure of the bridge for the repair. The outlines of the outlines will be preserved however the design includes a number of original architectural solutions. The bridge piers will be decorated with horizontal rustication grooves painted in a different color.

The design also includes a decorative highlighting of the bridge at dark.