Voroshilovsky Bridge is Open to Traffic 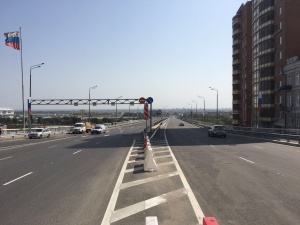 Voroshilovsky Bridge in Rostov-on-Don was open to traffic. The bridge opening was timed to coincide with the anniversary of Rostov Region. After rehabilitation the bridge has separate decks for each traffic direction. The total length of the bridge crossing is 623 m including a central span of 156 m.

The rehabilitation was carried out in 2 stages to avoid closing down traffic during the construction period. At stage 1, a new bridge for 3 traffic lanes was built upstream the existing bridge. At stage 2, the existing bridge decks were dismantled, the piers were strengthened and new decks for 3 lanes were installed.

The design provided for preserving the outlines of the existing bridge; however a number of new architectural solutions were implemented. For example, the piers were decorated with horizontal rustication grooves and an aesthetic lighting system was installed.

The first stage was commissioned on 11 August 2015.