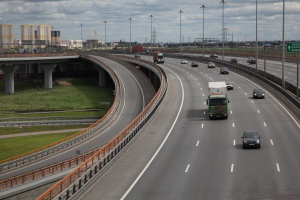 From 1999 till 2008, Institute Stroyproekt designed the following Ring Road facilities:

The Neva crossing with its cable stayed bridge (Big Obukhovsky Bridge) is the most complicated engineering structure within the Ring Road. The Design of 2001 provided for the project completion in two stages due to time lim itations. The 1st stage included erection of the bridge left part (downstream) with four traffic lanes (two in each direction) and flyovers at either bank. The 2nd stage comprised construction of the bridge right part (upstream) with four traffic lanes and flyovers.

The 1st stage of the bridge was put into operation in December 2004. In October, 2007 the 2nd stage bridge was opened for traffic. The cable stayed bridge across the Neva River has immediately become one of the city symbols.

16 design organisations including Danish and Finnish companies have been involved in development of the Big Obukhovsky Bridge.

Other engineering structures within the Ring Road designed by Institute Stroyproekt:

Presently, Stroyproekt is developing working drawings for the traffic interchange at the section from Narva Motorway to Bronka town including an access road to Bronka Port Terminal.

Institute Stroyproekt has been the General Designer for the Ring Road Southern Section, the Neva crossing and engineering structures.

Specialists of Stroyproekt Supervision Department executed the Designer’s Supervision at various Ring Road Sections including the Neva crossing, eastern and southern sections and the Flood Protection Barrier which is the Ring Road western section.

When back in 1999 Stroyproekt was developing the design for St. Petersburg Ring Road interchange with Primorsky roadway near Gorskaya railway station, we proposed composite structures not only for the main overpass but also for curved ramps of 60 m radius. It was an innovation as well since curved beams were considered to be difficult to manufacture. However, our solution was successfully realised and later on we have often used it when designing the Ring Road facilities.

At that time construction of the Ring Road that had been awaited by the city for such a long time had just started, and we tried to make the Gorskaya interchange architecturally  easy recognisable. We were not required to do so; it was our own initiative. White А-shaped (or trapezoid) pylons imitating entrance gates made this large structure look light and stylistically complete. This interchange opened in 2001 became a symbol of a new stage of the Northern Capital transport development that had begun with the Ring Road construction.

The most complicated structure of the Ring Road is a cable stayed Big Obukhovsky Bridge over the Neva. Its river span is 382 m long. The bridge has become the first fixed bridge across the Neva. 16 companies, including Danish and Finnish ones, have participated in its design. Stroyproekt was a General Designer of the bridge.