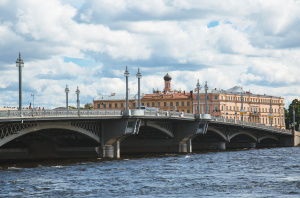 The project envisaged the rehabilitation of the first drawbridge over the Neva River built in 1850 to the design of engineer Stanislaw Kierbedz and reconstructed in the 1930s to the design of Grigory Peredery.

The rehabilitation included replacement of the decks, extension of the draw span, dismantling of the tram rails and installation of the central reservation. The bridge was widened to 37 m and equipped with automatic barriers to stop traffic when the bridge is drawn.

During rehabilitation works, the bridge was restored to its original appearance and soon received back its original name.

The rehabilitation design provided for reducing the weight of decks. The draw deck was re-supported onto the ends of the fixed spans. It allowed preserving the original foundations on wooden piles. The draw span was equipped with a hydraulic lifting system and lead counterweights.

For the construction period, a temporary bridge was built to divert the traffic. Its steel structures were used later to reconstruct Bolshoi Petrovsky Bridge.

Honorary Diploma and a Sign of Conformance for the design of Blagoveschensky Bridge rehabilitation and a great contribution to the city transport infrastructure improvement.