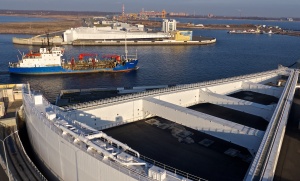 Stroyproekt have rendered services of the Project Manager/Engineer for the Flood Protection Barrier Completion Project (as a member of the consortium that included also Geningconsult, Moscow and Royal Haskoning, the Netherlands). The services were provided under the Contract no. 0301/03 of 22.09.2004 with Rosstroy (Russian Federal agency for construction) and financed by the European Bank for Reconstruction and Development.

The Flood Protection Barrier is a large-scale and complex hydraulic facility which has the overall length of 24.5 km and comprises two navigation openings, six water sluices and 11 earth dams.

Apart from flood protection and the Neva Bay hydrological regime control, the Barrier forms a part of the Ring Road around St. Petersburg.