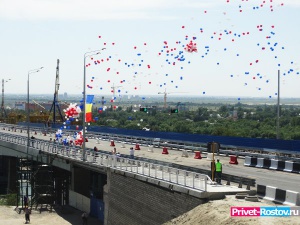 The opening ceremony was attended by high officials of the city and region administration, top managers of Rostov local company Mostootryad-10, Mostotrest branch and engineers fr om Stroyproekt Central and Rostov offices.
Construction of a twin bridge next to the existing one is the first stage of the bridge crossing rehabilitation project. During the implementation of the second and third stages of the project only two of three lanes on the new bridge will be open to traffic.  The third lane will be used as a working area for construction works on the old bridge.
The new three-lane 623 m-long bridge was built upstream the old Voroshilovsky Bridge that had been closed to traffic and taken out of operation in early 2014 because of its central span deformation.

After the old bridge is rehabilitated, the new twin- bridge crossing will double the traffic capacity of the road linking the right-bank part of the city with the left one wh ere a new stadium for Football World Cup 2018 is being constructed.  The new bridge crossing will also improve transportation between Rostov-on-Don and its satellite towns and municipalities of Rostov Region.

Photo by Dmitry Plotnikov from the web-site privet-rostov.ru.