The river span installed on Voroshilovsky Bridge in Rostov-on-Don 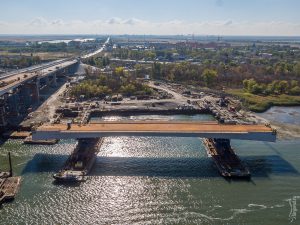 On 19 and 20 October, the contractors building Voroshilovsky Bridge closed the main span of the bridge in a complex engineering operation.

The 150 m-long segment weighing about 860 tons was delivered by barge and then lifted in the final position using cables. The operation took place at the planned date.  Now the contractors will complete the bridge deck and pave the carriageway.

After reconstruction, the bridge will have two separate decks for each traffic direction. The bridge will be fully open to traffic in 2017.