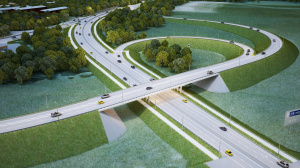 The street is designed to connect the northern and southern parts of the town and to divert transit transport from its historical centre.  The design of the street was developed in 3 stages.

Construction of this street was scheduled to the 700th anniversary of the birth of St. Sergius of Radonezh.

Scheme of the street (pdf)