Tolyatti Bypass with the bridge over the Volga River 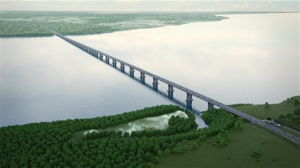 Construction of the Tolyatti Bypass with the bridge over the Volga River is of high strategic importance. It will significantly contribute to the economic progress and growth of the Samara Region and create favorable conditions for founding the integrated economic area and attracting the federal and foreign investments.

In general, the Project consists of 5 Stages. The Design of Stage 1 for construction of the Volga River Bridge itself was approved by the GGE in 2017.
The Stages 2 and 3 that are currently under designing will provide for construction of a 1B category express toll roads at approaches to the Volga River Bridge. The roads will accommodate 2 lanes of 3.75 m-wide in each traffic direction separated with a 2.7 m-wide central reservation.  The right bank approach (Stage 2) and left bank approach (Stage 3) are 32 km- and 23 km-long, correspondingly. The overall length of the Project including the Volga River bridge crossing is over 99 km.

Completion of the Project and opening the new express toll road for traffic is planned for 2024.