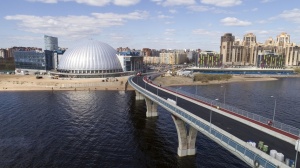 The bridge crossing links the southern part of Primorsky District with the northern shore of Krestovsky Island.  Connection of the bridge to the street and road network of Primorsky District envisages extension of Yakhtennaya Street towards the Gulf of Finland.  At Krestovsky Island side, the bridge crossing starts from reclaimed areas.
For navigation purposes the new bridge is designed as a fixed bridge with a 16 m-high and 60 m-wide underclearance at the Elaginsky Fairway. The maximum elevation of the bridge longitudinal profile over the design navigation level is 18.8m.
The designed bridge crossing is 960 m long.
The bridge itself is 491 m long and will have the span layout as follows: 39+42+42+45+57+69+57+39+3х33 m.
The bridge carriageway in cross-section is 9 m wide and includes two 3.5 m lanes and two side paths: a 3.5 m wide two-way cycle path from the city side and a 2.25 m footpath from the Gulf of Finland side for pedestrians.  The side paths are located at the carriageway level and separated from it with a parapet.
The bridge has a composite deck with two main box girders of variable depths ranging from 1.56 m in the span to 3.6 m over intermediate piers. The girders are connected with the crossbeams. A reinforced concrete carriageway slab 200mm thick is installed over the top of the steel structures. The deck is 16.29 – 17.1 m wide.
Bridge approach embankments from both sides are designed as 1 – 6 m high cast-in-situ retaining walls on pile foundations.
The footpath in the bridge middle part has a widening for scenic viewpoints.
The design includes architectural spot lighting of the bridge deck to emphasize functional and architectural peculiarities of the structure. In October 2015 a contract with the  Committee for Development of the City Transport Infrastructure signed on development of working documentation for the bridge. Completion of construction work was in May 2017.