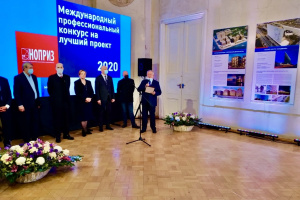 The Betancourt Bridge, designed by Institute Stroyproekt, is ranked first in the nomination "Best Engineering and Transport Infrastructure Project" at the competition organized by National Association of Researchers and Designers (NOPRIZ).

The Betancourt Bridge is a fixed cable-stayed bridge over the Malaya Neva River in St. Petersburg. The bridge was built in preparation for the 2018 FIFA World Cup and provides a shortest transport link between the airport and the Gazprom Arena Stadium. It is considered a unique bridge due to its alignment on a 1200 m-long curve, complicated configuration and the length of spans (more than 100 m).

This year 700 projects took part in the competition in 19 nominations, which addressed various aspects of architecture and urban design.

The competition was held with the support and participation of the State Duma of the Russian Federation, the Ministry of Construction and Housing, the Russian Academy of Sciences, the Association of Builders, and professional research and design organizations.

Congratulations to the designers of the project and Stroyproekt Engineering Group!