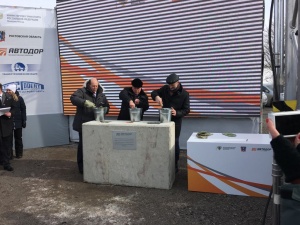 A groundbreaking ceremony that took place on 27 January 2018 signaled the start of construction of Aksai bypass, which will be part of the M-4 Don.

The ceremony was attended by Vasily Golubev, Head of the region, Yevgeny Ditrikh, First Deputy of the Ministry of Transport of Russia, Sergei Kelbakh, Chairman of the Board of the State Company Russian Highways, Aleksei Zhurbin, General Director of Institute Stroyproekt, Alexander Kusik, Director of Stroyproekt Moscow branch, and Yury Yershov, Director of Rostov branch.

The project provides for construction of new road sections and rehabilitation of several M-4 sections to bypass the city of Aksai. The project is part of the Federal Target Programme “Development of Russian transport system” and the long-term programme of activity of the State Company Russian Highways.

Vasily Golubev, Governor of Rostov Region, congratulated the attendees on the start of construction and highlighted that the project would be of major importance not only for Rostov Region but also for the entire country. Yevgeny Ditrikh stressed that Aksai bypass would be a completely new type of the road designed according to German standards and would have advanced technical parameters. Stroyproekt’s engineers have developed two design options: one is based on Russian standards and the other -  on German codes.

The design is intended to improve the road operational reliability and decrease maintenance costs during its service life. According to Sergei Kelbakh, “implementation of this project will raise the bar for higher technical category roads in Russia”.