Cable System Installation Started on the Bridge across Serny Island 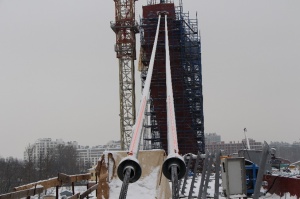 The construction contractor started installation of the cable system on the bridge across Serny Island in St. Petersburg.

According to the Committee for Transport Infrastructure Development, four pairs of cables have been already installed. By the end of March 2018, all 48 pairs of cables will be installed and prestressed, and then tensioned to the design force. The total length of the cable system is 143.9 m; the number of strands in stay cables varies from 43 to 73.

The 1228m-long bridge crossing is located on a curved line. The bridge will accommodate six lanes, a sidewalk and a cycling path.

The new bridge crossing over the Malaya Neva at Serny Island will create a new transport corridor connecting St. Petersburg Arena stadium on Krestovsky Island with the Western High Speed Diameter and will improve the transport situation on Vasilievsky Island and in Petrogradsky District of the city. The project is being implemented in preparation to the FIFA World Cup 2018 and is planned for completion by the end of April 2018.

The photo is the courtesy of AO Pylon.