Opening ceremony of the bridge over the Irtysh River 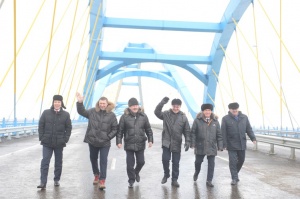 Today, on December 14th, a new bridge built in Pavlodar (Republic of Kazakhstan) to the design of our company was opened to traffic.

The opening ceremony was attended by Bulat Bakauov, Pavlodar Region Governor,  Mereke Pshenbaev, Chairman of Road Committee of Kazakhstan Ministry of Investments and Development, Yermek Kizatov, Board Chairman of NK KazAvtoZhol, top managers of engineering and construction companies and the regional public.

The new bridge will ensure permanent traffic between the regional centre (the city of Pavlodar) and a mono-industrial town Aksu, and will become part of a large-scale project for transport infrastructure development, namely construction of a 4-lane highway Astana - Pavlodar - Ust-Kamenogorsk linking Central Kazakhstan and neighbouring Russian regions. The project is constructed within the programme Nurly Zhol - transport corridor Centre-East. According to the Head of the region, the bridge offers an opportunity to develop a single conurbation of Pavlodar-Aksu and contributes to a further development of Aksu.

Project history:
In autumn 2013 Institute Stroyproekt was requested to optimise the design of the bridge arch span developed in 2010, reducing the construction time. The task was completed in a very short time. The river span proposed by our company is designed as a 40m-high continuous three-span network arch with the layout of 110+252+110.  The amount of steel structures was reduced for more than 5000 tons due to the use of stay cable suspenders.
The proposed design was approved by the Technical Council of the Road Committee of the Kazakh Ministry of Transport. In November 2014 the design was approved by the State Expert Review Authority. The detailed design was developed in parallel with the construction. By October 2016, the arch span was completed.
Stroyproekt Engineering Group has already implemented similar projects, for example Bugrinsky Bridge in Novosibirsk, which river span has been also designed as a network arch, 380 m long. The arch span of such length is a record length of the Russian arch bridges and a unique for network arches worldwide.

Our congratulations to all Stroyproekt’s team!