New interchange is opened to traffic in Tyumen 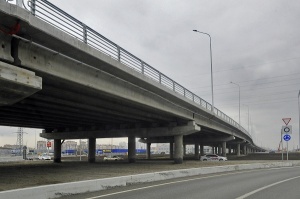 The opening ceremony was attended by high officials of the city and the region and top managers of design and construction companies welcoming the first motorists who drove on the new structure.

The construction of the new interchange at one of the most congested roundabouts of the city was completed far ahead of the schedule. According to Nikolai Russu, the General Director of Mostostroy-11 some remaining works, including landscaping will be finalised in 2017. At the opening ceremony, Vladimir Yakushev presented awards to the project participants. Stroyproekt was awarded with a letter of appreciation from the city administration.

We congratulate our team!

Read more at the web-site of the Governor of Tyumen Region:
http://gubernator.admtyumen.ru/governor_to/ru/news/more.htm?id=11392514@egNews