A new bridge opened to traffic in Balakovo, Saratov Region 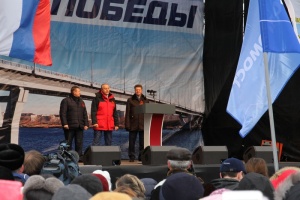 The opening ceremony took place on 9 December 2015. The ceremony was attended by the Minister of Transport Maksim Sokolov, the Governor of Saratov Region Valery Radaev and the Mayor of Balakovo Ivan Cheprasov, the representatives of construction contractors, and also the citizens and guests of the city.  The main designer, Proektmostorekonstruktsia was represented by the General Director of the company Viktor Morozov, Deputy General Director Oleg Derevyakin and engineers who developed the design of the bridge crossing.

The construction of a new bridge over the Volga navigation channel started in 2009.  The 2.5 km-long bridge links the city historic centre and new residential areas. The new crossing will increase traffic capacity not only in the Saratov area but also in other regions. It will provide a vital link between the central regions of Russia, the regions on the other side of the Volga River and Kazakhstan.  In Balakovo itself, the bridge will increase the mobility of the people living on the island part of the city. The bridge was named Victory Bridge.

Our congratulations to the team of Proektmostorekonstruktsia who designed one of the largest infrastructure projects completed in Russia in 2015.