Bridge and Traffic Interchange Opened to Traffic in Tyumen 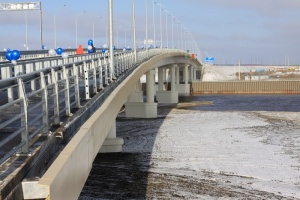 On 21 October 2015, a new bridge across the Tura River and a new traffic interchange at Dambovskaya Street were opened to traffic in the city of Tyumen. These facilities are part of Tyumen Eastern By-pass Project which is included into a large-scale transport development plan of this big regional centre. Transit traffic from/to Tobolsk and Omsk that now crosses the city will be diverted to the new motorway. This will relieve the central streets improving traffic safety and the urban environment.
Stage 1 of the Tyumen Eastern By-pass includes a 719m-long bridge across the Tura River, a two-level traffic interchange with an 86 m overpass at Dambovskaya Street, a road section and ramps with the total length of 4.3 km.  A 787m-long retaining wall will be constructed to protect the Tura River left bank against erosion.
Today Tyumen is a major industrial and traffic hub as well as an important cultural, scientific and educational centre of the Urals.