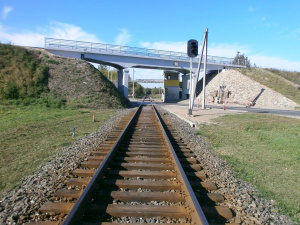 Construction of a new railway line bypassing the city of Saratov will increase the capacity of rail approaches to the Saratov transport hub and divert freight traffic from the city.

Implementation of the project will require joint efforts by the City and the Russian Railways (OAO RZhD).
Stroyproekt is designing grade-separated intersections between the existing roads and a planned railway line.
In 2019, the company developed the design for Stage 4 of the Project, in particular, a viaduct above the railway at PK 18+50 and intersections with federal highways. Instead of road overpasses, our engineers suggested a solution with railway tunnels under the roads. This solution was approved by all project stakeholders. The design documentation for railway tunnels was submitted to the Client in December 2019.
The company’s services also included a feasibility study for construction of a railway overpass and rehabilitation of adjacent streets in Tatischevo settlement.

In 2020, the design of the entire project will be submitted to the state expert review authorities.