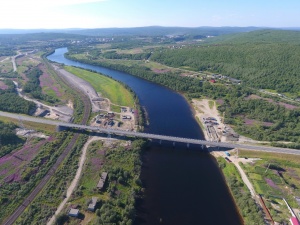 
The project is included into the federal target program “Development of Russian Transport System for the period from 2010 to 2020" and will be implemented based on PPP principles. The purpose of the project is to create transport infrastructure on the western coast of Kola Bay including construction of coal and oil terminals, development of railway infrastructure, rehabilitation of the existing coal terminal and construction of a new container terminal on the eastern coast of Kola Bay.

The contract provides for development of working documentation and construction of a multi-functional transport hub including a 43 km electrified railway line.
The project includes construction of a new 30 km road section and a 50 km railway line. The existing railway station will be extended and 3 new stations will be constructed.

The project will be implemented under a concession agreement.
Under the contract signed with the State Client, Stroyproekt will control elaboration of working documentation and carry out construction supervision.