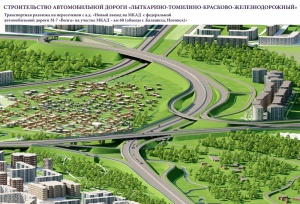 The lack of regional roads in the suburbs of Moscow has led to usage of radial roads and Moscow Ring Road for linking the neighboring districts, which resulted in traffic congestion of these roads and overmileage for the drivers. This problem is especially grave in the districts located to the East and Southeast of the Russian capital and, to resolve it, construction of new direct highway links is required. One of such motorways will connect Lytkarino to Zhelesnodorozhny through Tomilino and Kraskovo.

Lytkarino - Zhelesnodorozhny Motorway is a key element of the new roadway network of Moscow Region.