Bridges of the State Palace of Congresses in Strelna 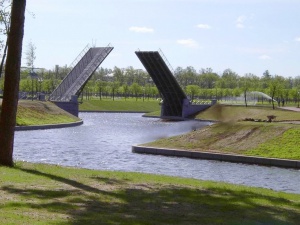 The project included restoration of a palace and park complex in Strelna and development of the State Palace of Congresses as a seaside residence of the Russian President.  The project schedule was extremely tight since the works had to be completed by the celebration of the city’s 300th anniversary. The main jewels of the restored 18th century Strelna Park are its canals and numerous bridges. By the start of restoration most of the bridges were in ruins.
Within one year Stroyproekt developed designs for the following elements of the Strelna complex:

While in the past the bridges of the Lower Park were designed for pedestrians, the new bridges have to resist traffic loads. The draw bridges were designed to provide access of passenger boats to Konstantinovsky Palace.

As required by the Committee for State Control, Use and Protection of Historical and Cultural Monuments, after reconstruction the bridges of the Lower Park were to resemble the style of the 19th-early 20th centuries. Stroyproekt had successfully implemented this extraordinary task. The bridges that can bear a modern tank look light and elegant. The huge mechanisms of the draw spans are located inside the piers and are invisible for the park visitors.

Construction of bridges, embankments and hydraulic structures was completed by May 2003 just before the grand celebration of the 300th anniversary of the Northern Capital of Russia.