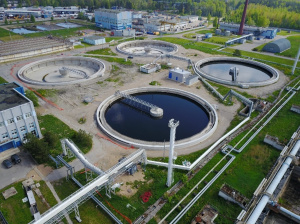 Northern Wastewater Treatment Plant in Olgino settlement is the second largest wastewater treatment facility of St. Petersburg. The Plant processes the wastewater discharged by the city right-bank districts with population about 2 million people. It was erected in 1987 and then extended in 1994. The plant design capacity is 1 250 000 m3 of effluents per day. Its rehabilitation is aimed at implementation of enhanced nitrogen and phosphorous removal.

The Discharge Control Unit 422 is a pumping station for the main sewer in the city northern area delivering wastewater to Severnaya Plant. The sewer first section (from the Chernaya River to Severnaya Wastewater Treatment Plant) was put into operation in 1986. Construction of the remaining sewer section (from Finlyandsky Railway Station to the Chernaya River) was started in 1987 but in 1990-es it was suspended due to financial problems. Construction of this complex facility was restarted in 2006 with support of several European countries and IFI. Some changes have been introduced into the final design; in particular, a discharge control unit has been anticipated to ensure the plant flow capacity.  At present, completion of the main sewer is coming to an end.

Stroyproekt is involved into the Project as sub-consultant under a consultancy contract with COWI Engineering, Environmental and Economic Consulting LLC (Russian branch of Danish company COWI)

The Project is financed by European Bank for Reconstruction and Development. Construction is completed.