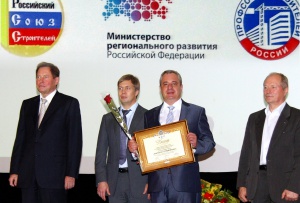 Stroyproekt has gained another victory in the Russian Roads Contest.

In 2013 Stroyproekt presented its Dvortsovy Bridge reconstruction project, which has won “Project of the Year” Nomination.

Dvortsovy Bridge is the fourth historical bridge across the Neva in St. Petersburg that is being reconstructed under a design of Institute Stroyproekt.

The designers have had a challenging task to develop the design for the bridge reconstruction that would both meet up-to-date service requirements and preserve the most of the existing architectural elements of Dvortsovy Bridge which is one of the cultural heritage sites of St. Petersburg.

Dvortsovy Bridge is a major transport link in the city centre and Stroyproekt’s engineers have also resolved a traffic problem: they proposed a work organisation plan which allowed avoiding a full traffic closure.

The award ceremony was held in Moscow on 3 October 2013, the prize was received by Alexey Zhurbin, General Director of Stroyproekt.