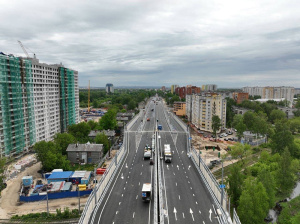 On June 3, a new traffic interchange at Tsiolkovsky Street was officially opened to traffic. The opening ceremony was attended by Deputy Prime Minister Dmitry Chernyshenko, the President’s representative in Volga Federal District Igor Komarov and the Governor of Nizhny Novgorod Region Gleb Nikitin.

Speaking at the ceremony, the Governor noted that construction of the new interchange was one of largest transport projects implemented in preparation for the 800th anniversary of the city. The interchange will solve the problem of heavy traffic jams at the railway crossing, which separates Sormovo with its 50 thousand residents from the other city districts.

Tsiolkovsky Street is one of the city’s radial thoroughfares intended for transit traffic and traffic from residential neighbourhood. The interchange includes a single overpass above railway and tram tracks, which will enable uninterrupted traffic flow along the street and reduce congestion.