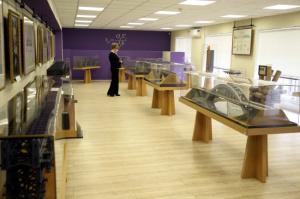 On September 26, a new museum was opened in St.Petersburg. It is a branch site of the Central Railway Transport Museum – the Bridge Museum. The exposition covers the last two hundred years of Russian bridge engineering.

It presents over 100 models of bridges and bridge structures. The oldest model representing the first bridge over the Neva was designed by the Swiss engineer Aldon in 1762.

Visitors have an opportunity to examine design models of those bridges that no longer exist. These are the models of two chained bridges - Egyptian Bridge and Pantleymonovsky Bridge that existed until the beginning of 20th century. The central hall exhibits the model of Blagoveschenskiy Bridge before its reconstruction in 1936 – 1938. Modern bridges are represented by the model of Bolshoy Obukhovsky Bridge. All showpieces are not mere scaled copies, but technically perfect replicas, and some of them are real examples of engineering art.