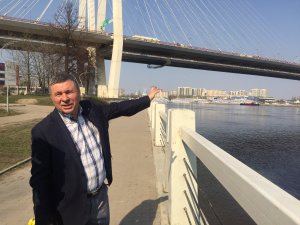 Gorod (City) Plus TV Channel has shown a video about Big Obukhovsky Bridge in St. Petersburg. Alexander Stanevich, Advisor to Stroyproekt General Director told about the project and its features. See the video here: https://gorod-plus.tv/videos/60862


Big Obukhovsky Bridge is the single fixed bridge over the Big Neva.  The first stage of the bridge was opened to traffic on 15 December 2004 and the second stage – on 19 October 2007.  At that time it was the longest and widest bridge in St. Petersburg and in Russia.  The design of the bridge was developed in a very short time. The design solutions provided for intensive navigation at the bridge site. The bridge features an integrated structural health/engineering utilities monitoring system and a heated storm water drainage system.