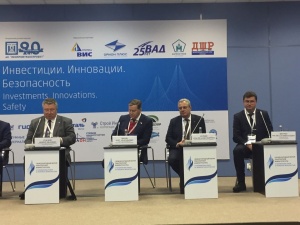 The First International Transport Infrastructure Forum opened at the Lenexpo exhibition grounds in St. Petersburg. The objective of the Forum is to exchange the best practices in the industry, promote innovations and to attract investments to the road sector.

The official opening ceremony of the Forum was held on 27 November 2018. Igor Albin, Vice Governor of St. Petersburg, welcomed the participants on behalf of the Acting Governor Alexander Beglov, expressing his confidence that the forum would contribute to effective development of the industry, opening new prospects and strengthening international cooperation”.

Aleksei Zhurbin, Stroyproekt General Director, attended the panel discussion “Prospects and goals of the regional road network development to 2024” and moderated the round table organized by Stroyproekt to discuss road and bridge engineering involving BIM technologies.

BIM technologies is a process of performing work based on state-of-the-art software systems, and it is more than just 3D modelling.  The components are intelligent, so they store and process data, and enable professionals and clients to cooperate at key stages of the project: design, construction and operation. Introduction of BIM technologies represents a new technological level, that means not only improved design solutions, but also minimized project costs.

At the request of Rosavtodor, Stroyproekt has conducted a research on BIM application in infrastructure projects. The outcome was a set of provisional regulations defining requirements to pilot BIM projects and draft amendments to the terms of reference for transport infrastructure design. The Stroyproekt’s findings formed the basis of a new road industry guidance, which was put into effect in June 2018 (ODM 218.3.105-2018).

The construction industry has been digitalizing dynamically, and BIM technologies, though not yet generally adopted, is undoubtedly the future of design. Stroyproekt has been implementing several BIM-based projects: a road bypass of the city Barnaul, a bridge over the Neva River on a planned new urban highway and the Betancourt Bridge construction project.