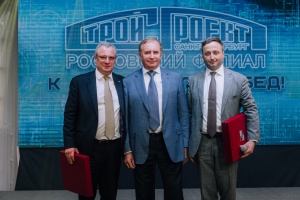 The festive event was attended by Mayor of Rostov V. Kushnaryov, Rostov Region Minister of Transport A. Ivanov, Deputy Minister of Territory Development, Architecture and Urban Construction A. Polyansky, top officials of regional municipalities and representatives of construction contractors.

The event held in the southern capital of Russia marked an important milestone for Stroyproekt’s Rostov branch. The colleagues fr om St. Petersburg recalled the projects for the 2014 Winter Olympics in Sochi implemented with the active participation of a newly established Rostov branch. Another important step was the M-4 Don project, wh ere the branch became a main designer of several road sections. Nowadays the company works not only in Rostov region but also in Krasnodar, Moscow and Volgograd regions, and the Republic of Adygea.

Aleksei Zhurbin, General Director Institute Stroyproekt, congratulated Rostov colleagues with the 10th anniversary and said that over the last 10 years they had gained unique experience of the main designer on important and complex projects. The branch is remarkable for their capability to work within an extremely tight schedule, coordinating activities of dozens various companies and aiming to meet the needs of the client.
The director of the branch, Alexander Kusik wished new professional achievements, fruitful work and health to the entire team.

Governmental agencies, private investors and contractors operating in the transport infrastructure sector have been expressing their interest to the projects designed by the company. This clearly indicates that Rostov branch has found its niche and is on the right track for new developments.