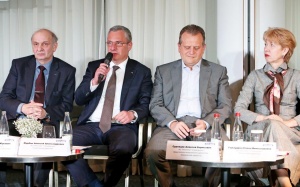 The directors of the member companies and business divisions summarized the outcomes of the Group’s performance in 2015 and shared the plans and prospects for 2016.

Some of the projects we were working on last year will be completed soon. First of all it is the Western High-Speed Diameter Project in St. Petersburg. This state-of-the-art highway is planned to be commissioned at the end of 2016. Our engineers are about to finalise the detailed design for Section 6 of Moscow - St. Petersburg Express Toll Highway. In Rostov-on-Don, the upstream section of Voroshilovsky Bridge was opened to traffic and now a new downstream bridge decks are being erected. Last May, construction of the river span for the Irtysh River Bridge started; the bridge is part of a new bypass road around Pavlodar in Kazakhstan.  In December 2015, Victory Bridge was opened to traffic in the city of Balakovo, Saratov Region.


Stroyproekt proceeds with the design of such large-scale and challenging projects as the Khabarovsk Bypass Project, transport infrastructure for the 2018 FIFA World Cup (Serny Bridge and a new bridge to Krestovsky Island), the 4th Ob River Bridge in Novosibirsk and a number of projects in Kazakhstan and Turkmenistan. This is by no means a full list of our projects.

At the meeting, the member companies signed the Technical Control Policy of the Stroyproekt Engineering Group.  This new document sets the main principles of quality control over design documentation and cost estimates to exclude any discrepancies or non-compliances with the existing regulations and standards.

Although last year turned out to be quite difficult, Stroyproekt generally reached the set targets. Moreover, 2015 became a landmark for the company - we celebrated the 25th anniversary.

In 2016 we are planning to maintain the rate of development and improve efficiency of our work.