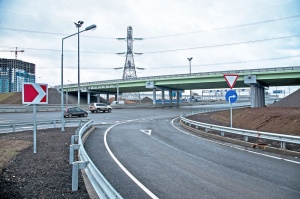 On 24 December, the bypass of Tarasovka (the first stage) was officially open to traffic after rehabilitation.  The opening ceremony was attended by the Russian Minister of Transport Maksim Sokolov, the First Deputy of the Minister Eugeniy Ditrikh, the Head of Rosavtodor Roman Starovoit and the Moscow Region Governor Andrey Vorobjev.

The rehabilitation project included construction of five bridges and overpasses, a pedestrian overpass and a grade-separated interchange. The road pavement was made of crushed-stone and mastic asphalt resistant to climatic changes and damages due to traffic loads.
Besides, speed change lanes were built and road shoulders were strengthened. To improve the road safety, the road lighting was modernised and additional road signs and marking were provided.
The number of lanes was increased to ten to increase traffic capacity of this road section. In addition to the main road, side access roads were built from both sides. The design speed at the section is 120 kph.
The decision on the Tarasovka bypass rehabilitation was taken to reduce congestion on this section of the М-8 federal road, which had been a critical problem over the last years. The traffic has been increasing every year, especially in the morning and evening rush hours, and people driving to work or back home had to waste their time in traffic jams. After the opening of the repaired bypass this problem will be solved.

We congratulate the engineers of Stroyproekt Engineering Group who participated in the design of this project.