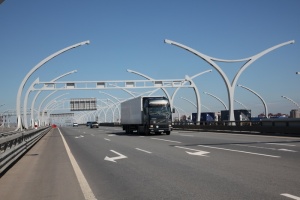 The All-Russia Association of Road Sector Employers (ASPOR) and the All-Russia Trade Union of Road Transport and Infrastructure Workers have summed up the results of Russian Roads 2015 Contest. The award ceremony was held in Moscow.
In 2015, Stroyproekt presented its major international investment project of the Western High-Speed Diameter (WHSD) implemented in St. Petersburg where Stroyproekt performs the functions of the General Designer.
The WHSD project is one of the biggest PPP road projects in the world. This project allows improving the transport situation in St. Petersburg, relieving its center, Vasilievsky Island, and northern and northern districts from traffic congestion.
Brief description of the Project:
The WHSD motorway starts in the southern part of the city from the intersection with St. Petersburg Ring Road and runs via the Sea Port area to Vasilievsky Island and then to the north to merge with the E-18 Scandinavia motorway.
Since the road is mainly located in the narrow corridor within the densely developed urban areas and crosses a great number of utility lines, more than 20 km of the road  run on flyovers and viaducts designed to have a uniform architectural  appearance, which reflects  modern bridge-building achievements and environment friendly attitude to the existing cityscape. Most of the WHSD flyovers are well visible from other urban roads, residential areas and public centers, therefore they are provided with noise screens and arch-like lighting supports, which create a recognisable architectural image of the entire road. Curvilinear cross-section shapes highlight the modern nature of the highway and make it look more dynamic.