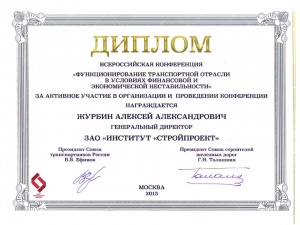 The conference held at the Russian Chamber of Commerce was organised by the State Duma Committee for Transport,  Russian Transport Union and the Centre of Strategic Development.
The main goal of the conference was to develop consolidated measures for supporting the road industry in a situation of reduced funding in the context of anti-crisis measures.
A. Zhurbin gave a presentation on “New bridge construction project over the Ob River in Novosibirsk as an example of a large-scale infrastructure project implemented under PPP”.
During the discussion on the issue the speakers emphasised the importance of public private partnership for maintaining technical and intellectual capacities of the industry. They stressed the need for an increasing interaction between the Government and the business community in the road industry.
A. Zhurbin was awarded an honorary diploma.