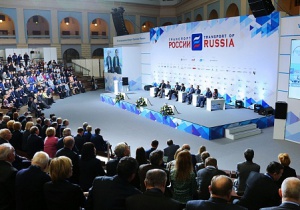 The main focus of this year programme is ensuring outpacing transport infrastructure development and coordinating of regional development programmes with a basic document – Russian Transport Strategy 2030.
The programme of VIII International Forum and Exhibition “Transport of Russia” are available on the forum web-site. The Transport Week 2014 programme included the following events:
•    VIII International Forum and Exhibition “Transport of Russia”
•    Awards ceremony of the “Motion Formula” National Prize for achievements in the transport and transport infrastructure industries
•    Business breakfast by Minister of Transport of the Russian Federation Maksim Sokolov with representatives of investment and finance institutions, construction and transport companies
•    Coordination transport meeting of CIS countries
•    Meeting of Ministers of Transport of the Member States of the Customs Union and Eurasian Economic Space
•    Road Traffic Russia International Congress

Western High Speed Diameter Project in St. Petersburg was acknowledged to be the best in “The Best Infrastructural Project” nomination. Institute Stroyproekt is a General Designer of the Project.
Stroyproekt representatives participated in a plenary discussion within the Transport of Russia Forum devoted to advanced development of transport infrastructure.
The Forum gathered a wide audience of high officials of the Ministry of Transport of Russia, top managers of the largest Russian and foreign companies operating in the transport and transport related industries as well as representatives of the financial sector.