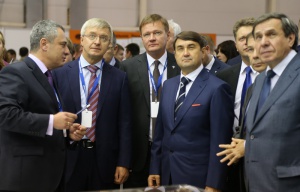 Maxim Sokolov, Russian Minister of Transport, opened the Exhibition. The opening ceremony was also attended by Igor Levitin, aid of the Russian President, Roman Starovoit, Rosavtodor Director, Vladimir Gorodetsky, Governor of Novosibirsk Region, and Anatoly Lokot, Mayor of Novosibirsk. In his speech, the Minister of Transport pointed out: “A number of interesting projects and Companies are presented here. They demonstrate innovations of the road sector development. Some projects are distinguished by use of new techniques and innovation materials, which implies not only financial savings for construction but also improvements of the Russian roads quality in compliance with international standards. More than 40 exhibitors have taken part in the Exhibition including the Federal Road Agency, Government of Novosibirsk Region, State Company “Russian Motorways”, General Contractor of Bugrinsky Bridge across the Ob River “Sibmost” and others.

Stroyproekt has exhibited its major infrastructure projects such as Backup of Kurortny Prospect, Airport and Stadium traffic interchanges in Olympic Sochi, the Bridge to Russky island in Vladivostok (Construction Supervision), Bugrinsky Bridge in Novosibirsk with a record-breaking network arch span of 380 m and a design of the forth Ob River crossing. Alexey Zhurbin, Stroyproekt General Director, told Maxim Sokolov and Igor Levitin about Engineering Group Stroyproekt and stressed that our specialists have mastered the most advanced design and construction supervision methods at the international level. To illustrate this, Alexey Zhurbin gave an example of Stroyproekt participation in the assignment for the design of Oslo-Fjord crossing in Norway. “Stroyproekt is the leader of the toll roads design in Russia. We started in 2004 from the Western High Speed Diameter project and have gained the unique experience of working under PPP agreements on the construction project of Moscow-St. Petersburg Express Motorway, M-4 “Don” and M-1 “Belarus” motorways. We are currently developing designs based on PPP agreements for the fourth Ob River crossing in Novosibirsk and the transport by-pass of Khabarovsk”, added Mr. Zhurbin.

Mr. Sokolov also held a meeting with the road sector scientific community to discuss innovations in the road field development. The meeting was attended by I. Levitin, R. Starovoit, V. Gorodetsky, the leading scientific experts and managers of the major research institutes. The Minister pointed out that the State has set the task of transition to an innovative and socially oriented type of the road field development. However, some of the existing standards and regulations have become obsolete and now interfere with the active introduction of state-of-the-art innovations. One of these constraining factors is the old trial facilities of scientific road centers.

Mr. Zhurbin has reported about the current issues of the modern design. He stressed that the designers are in need of updating the regulatory framework and the urban planning legislation in the field of transport construction. To resolve this problem, he proposed to establish a scientific research center that would develop special albums with recommended technical solutions for motor roads and would approve typical designs. “The scientific research and training center established in Stroyproekt has been carrying out independent research for several years already”, stated Mr. Zhurbin in his report.