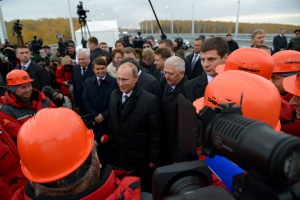 On 8 October 2014, the third bridge across the Ob River in Novosibirsk was open for traffic.

“I want to congratulate everyone on this wonderful event. As you know, Novosibirsk was long in need of a third bridge, and you all proved up to the task.
We discussed the matter and took the decision back in 2008, started work in 2010, and now, a little more than four years later, we are opening this bridge, which is really a unique piece of infrastructure, not just for Russia but even on the global scale it is an excellent example and is certainly so for Russia.  It has the world’s biggest arch at 380 metres and uses the latest technology. It is a big edifice – 5.5 kilometres counting the approach roads and with the bridge itself measuring 2.1 kilometres in length.
Most important of all though was that people really needed this bridge. Novosibirsk will develop and this bridge’s construction was a much-needed and timely boost for the city’s economy. Housing construction will also go ahead more actively now. The bridge links two federal motorways and there is an additional road running to Tolmachevo Airport. Overall this a very important step in developing Siberia’s infrastructure.
I hope that everything has been done to the highest standards. Time will be the ultimate test, of course. We discussed just before the next steps needed to continue expanding the region’s infrastructure.
I congratulate you and wish you the very best and new achievements ahead. This is a great accomplishment. Thank you very much. (Cited from www. kremlin.ru.)

The Road Construction Administration of the Mayor’s Office of Novosibirsk is the Client of this large-scale infrastructure project, Institute Stroyproekt is the General Designer and Sibmost OJSC is the General Contractor.

Vladimir Gorodetsky, Novosibirsk Region Governor, briefed Vladimir Putin on the works progress and quantities and told him about the history of the bridge. He thanked the Federal Government for the assistance provided in the process of construction and described the plans for further development of the regional transport infrastructure including the new bridge, which will make part of the Northern and Eastern bypasses of Novosibirsk. This transport solution will be an example for development of the modern road network. The Minister of Transportation has given a positive assessment of the Governor’s plans.
A convoy of loaded trucks opened the traffic on Bugrinsky Bridge. Then the participants of the ceremony headed by Vladimir Putin drove along the bridge followed by 500 cyclists.

According to the information provided by Sibmost press-service.