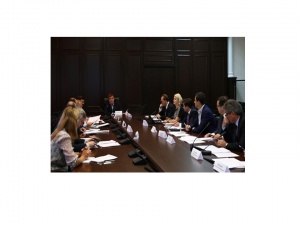 The third meeting of the Russian Builders’ Union (RSS) Engineering Committee took place on 24 September 2014.  It was chaired by the Head of Committee Gennady Sakharov, Director for Capital Investments of Rosatom State Corporation and Director of the Industry Capital Construction Centre.  The Committee members discussed the outcome of the negotiations between the Committee delegation and FIDIC Board held in FIDIC Headquarters in Geneva in late August 2014. According to Mr. Sakharov, “instead of reinventing the wheel, today we should make use of the international expertise and already developed engineering methods, and implement them in Russian construction industry”.  “To achieve this goal, a long-term collaboration with FIDIC shall be enabled”, he stressed.
Following the discussion,   a working group for international collaboration was set up within the Committee. The group will be headed by Oleg Kaschenko, a representative of Stroyproekt Engineering Group and a Council member of the RODOS Self-Regulating Organization (Association of Road Design and Survey Organizations). The group members are Pavel Kapyrin, Head of Scientific Research Department of Moscow State University of Civil Engineering and Artyom Serebryannikov, General Director of JSC Intertest.  Gennady Sakharov also suggested including a representative of Rusatom Overseas JCS – a Rosatom affiliated company – into the group since they operate mainly in the foreign markets.
The members of RSS Engineering Committee also discussed organization of the first conference of construction engineering companies under the auspices of RSS that planned to be held at the end of November 2014.