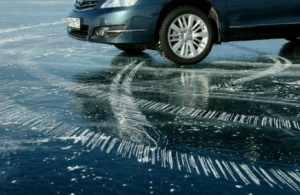 Asphalt rutting due to use of spiked tyres is now extensively discussed by Russian road experts. Spiked tyres are one of the main reasons of road rutting; however until recently there have not been any regular data on how often spiked tyres are used in various regions of Russia.

The study included the following methods of spiked tyre use registration:
– Snapshotting and video shooting of passing vehicles during winter periods;
– Visual examination of vehicles parked in road influence zones during winter periods (parking at business centres and hypermarkets, railway stations and airports, residential areas, petrol stations, etc.). Only the vehicles that seemed to be operated were examined.
– Interviewing of drivers at petrol stations (during summers periods).

The main conclusions of the study:
•    Nowadays spiked tyres are practically not used for heavy trucks. Spiked tyres are mostly used for motor cars and are quite common for light trucks (with maximum 2 tons capacity) and minibuses. The weight of spikes of cars and light trucks is different which results in different wear rates of the road pavement.
•    During winter, the percentage of vehicles equipped with spiked tyres varies. When the winter starts, their percentage increases reaching its maximum in the middle of winter and then decreases in spring. However, about 1 - 2% of cars remain having spiked tyres also in summer.
•    Drivers normally start using spiked tyres when the average daily temperature becomes about +10 о С in autumn and stop using them when the average daily temperature in spring is also +10 о С approximately.

The percentage of vehicles equipped with spiked tyres decreases towards the south of Russia owing to different climate conditions.

The results of the study can be used when developing Russian standards for application of spiked tyres.  At present their use is not regulated anyhow by Russian norms except for their weight limit specified in GOST R 52747-2007.