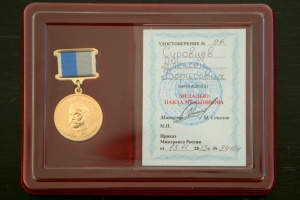 Alexey Surovtsev, Technical Director of Stroyproekt, was awarded this medal for his achievements and many years of conscientious labour.
The Medal in honor of Pavel Melnikov, Minister of Communications of the Russian Empire in the 19th century, is awarded by the Ministry of Transport of Russia.
We congratulate Alexey Surovtsev and wish him every success!