On 19 October 2013 Dvortsovy Bridge was opened after reconstruction. 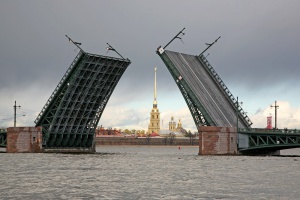 The bridge was officially opened after the Governor signed an order stylised as a historical document of the Peter the Great times.

The bridge rehabilitation included a full replacement of the draw span mechanisms and reconstruction of the piers.  The repair work will be finalised in December, however all the 6 lanes are already open for traffic.