Siny Bridge across the Moika River 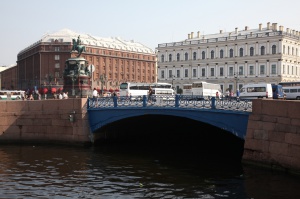 
Siny Bridge across the Moika River is located in Admiralteysky District of the city of St. Petersburg. It links Kazansky and 2nd Admiralteysky Islands. The bridge was built in 1818 (since 1737 there had been a timber bridge at that place). It was widened in 1842 and reconstructed in 1930. Siny Bridge is the widest bridge of the Northern capital of Russia.
The bridge technical state was the matter of serious concern, in particular: insufficient bearing capacity, significant corrosion and mechanical damage of the cast-iron vault elements, and defects of piers, decks, pavement, waterproofing, drainage and barriers. Taking into account that Siny Bridge is the monument of historical and cultural heritage, special repair and renovation methods were required to preserve the historical bridge.
Main technical parameters:
-    width: 97.3 m, including a 89.5 m-wide carriageway
-    width of the bridge with cast-iron tunnel vault: 57 m
-    width of reinforced concrete vault: 41 m.
The Project includes:
-    strengthening of the deck, construction of a reinforced concrete relieving vault above the existing cast-iron tunnel vault
-    preservation of the existing appearance and partial restoration of its historical  look in compliance with requirements of the Committee for State Control, Use and Protection of Historical and Cultural Monuments
-    repair of the cast-iron tunnel vaults