Central Bridge over the Ob River in Novosibirsk: the deck launching completed 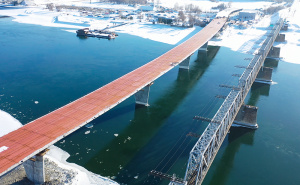 The launching of the Central Bridge deck has been completed. The launching operation that included 15 stages took a year. 715 m of steel structures with a total weight of over 9000 tons were assembled.

The deck was launched from the left to the right bank at a height of over 13 m above the water using four hydraulic jacks with a total capacity of 1200 tons.

The assembly of the cable-stayed section and construction of a 114m-high pylon are ongoing on the right bank of the river. On the left bank, retaining walls of grade-separated interchanges and piers of the mainway flyover are being built. The project also includes construction of a toll plaza and two underpasses underneath Trans-Siberian Railway. The new bridge will be 1.5 km long, while the total length of the bridge crossing including approaches will exceed 5 km.

The new bridge is designed to reduce traffic load on the existing bridges and improve transport links between the city’s districts located on opposite banks of the Ob River.

The PPP project is being implemented by the VIS Group with participation of Gasprombank. Stroyproekt has been developing the design and detailed design.

The photo courtesy of the VIS Group