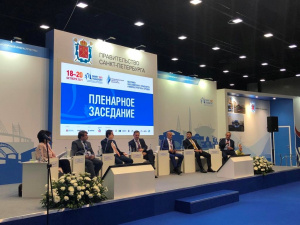 A plenary session of the International Forum of Transport Infrastructure and a round table ‘Transport infrastructure for people’ took place today. At the session, the participants discussed current issues of investment projects in the transport infrastructure of St. Petersburg. Aleksei Zhurbin, General Director of Stroyproekt, spoke about the problems in pricing of the infrastructure projects and possible steps to improve the contractual system of concession projects.

The participants, including St. Petersburg Government officials and Gazprombank representatives, discussed PPP as an implementation mechanism of large investment projects and their positive impact on the city economics and development, and Gazprombank “green projects” as well. Transport infrastructure for people’ round table addressed issues of speed limit in the city, the balance between the aesthetics and constructability of transport facilities, traffic capacity of the city historical centre, smart and safe roads, and development of the subway.

Aleksei Zhurbin spoke about the aesthetics of reliability as the company’s main design approach and shared the experience in creating and renovating transport facilities in St. Petersburg and other Russian cities.
The representatives of the Transport Infrastructure Development Committee, Urban Planning and Architecture Committee, Northern Capital Highway LLC and Metrogipotrans JSC attended the round table.
At the Forum, an exhibition of the latest developments in road and transport sector was opened.

Vice-Governor Maxim Sokolov welcomed the participants and the guests. He also tried a virtual tour of Vitebsky Prospekt interchange. On October 18, the fifth International Innovative Forum of Public Transport SmartTRANSPORT and the second International Forum of Transport Infrastructure were opened at EXPOFORUM. This is the first time these two important road and transport events take place together in St. Petersburg. The focus of the business agenda, which includes more than 20 events, is on a constructive dialogue between the authorities and the transport sector companies.