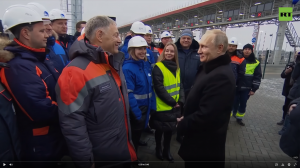 On November 27, Stage 8 of the M-11 express toll highway Moscow - St. Petersburg opened to traffic. The opening ceremony was attended by the President of the Russian Federation Vladimir Putin.

This road section from Tosno to St. Petersburg, which runs from 647 to 684 km of the highway, was the final stage of the project. The M-11 starts at the Moscow Ring Road and finishes at junction with St. Petersburg Ring Road. Most of its route goes parallel to the highway M-10. However, there are six crossings of the M-11 and the M-10 that are grade-separated interchanges. The total highway length is 669 km.

The M-11 is the first built-from-scratch highway in the nation’s post-Soviet history that links the two largest Russian cities. The construction project was split in six contracts: two concession agreements and four long-term investment agreements. Stages 7 and 8 of the project, i.e. the last sections from Novgorod to St. Petersburg, were constructed by Two Capitals Highway, a joint venture founded by the VTB bank and the French company VINCI Highways.

The new highway will contribute to further development of both freight and passenger transportation, which, in its turn, will increase the investment potential of all regions within the project attraction area.