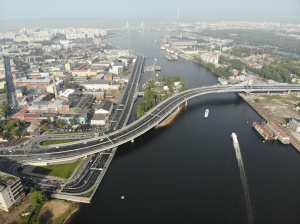 The award ceremony for the Russian Roads - 2019 contest took place in Moscow on October 10. The Betancourt Bridge, designed by Institute Stroyproekt, won the special Unique Project of the Year prize.

One of the contest organizers, Alexander Malov, President of Employees Union ASPOR, presented the award to Aleksei Zhurbin, General Director of Institute Stroyproekt.

The Betancourt Bridge was built in preparation for 2018 FIFA World Cup and opened to traffic on May 13, 2018. The bridge accommodates six lanes, a sidewalk and a bike path.

Our congratulations to the designers of the Betancourt Bridge project and everyone in Stroyproekt Engineering Group on the victory!