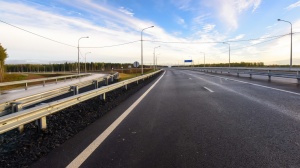 On Sunday, December 9, 2018, the opening ceremony took place in Kaluga for the motor road around Kaluga at the section Sekiotovo - Annenki with a bridge across the Oka River.

21 kilometers of a new four-lane road connect three federal highways: access to Kaluga from the M-3 “Ukraine”, R-132 Kaluga -Ryazan and R-92 Kaluga - Oryol. Driver’s comfort, speed and ecology – this is the new federal motor road as described by the Minister of Transport of the Russian Federation Yevgeny Dietrich. He attended the ceremony as a member of the official delegation. It also included Deputy Prime Minister Maxim Akimov, Presidential Plenipotentiary in the Central Federal District Igor Schegolev, Head of the Federal Road Agency Andrei Kostiuk, Governor of Kaluga Region Anatoly Artamonov,  and representatives of the Government of Kaluga Region, municipal authorities, construction companies and the Kaluga citizens.

On the same day, an award ceremony was held in Kaluga. Regional and industry awards for excellence and personal contribution in the construction of the by-pass were presented. Among those awarded were designers of Stroyproekt Engineering Group, which was the main designer of the new road. In order to complete the Kaluga ring, another 21 km of the road is be constructed. In the meantime, the opening of the Southern Bypass was a great New Year gift for Kaluga Region residents and many drivers.