Another segment of Yaktenny Bridge installed 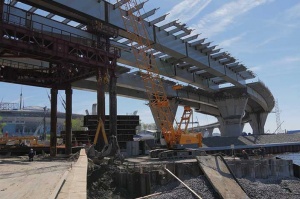 On 22 August the next deck segment was erected on the new bridge being built at Yakhtennaya Street in Primorsky District of St. Petersburg.

That was the fifth span where preassembled main beam blocks were installed. So far eight piers have been completed and two piers are still under construction. The contractor is continuing construction of foundations and retaining walls as well as relocation of utilities.

The bridge is scheduled to be opened to traffic by June 2017.

Yaktenny Bridge is being built as part of the preparations for the 2017 FIFA Confederations Cup and the 2018 FIFA World Cup. The new bridge will ensure access of spectators to the new stadium from Primorsky District.

The construction of the bridge designed by Stroyproekt started in February 2016.

The main contractor is ZAO Pylon.