The bridge over the Sea Channel is soon to be completed 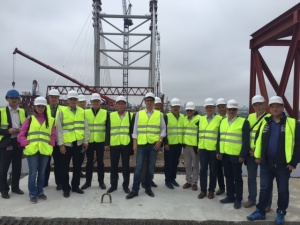 Construction of the most complex part of the Western High Speed Diameter, a 12 km-long Central Section will be completed soon.  It is not by chance that this section is considered to be a special challenge: it comprises unique engineering works, in particular a large double deck bridge over the Sea Channel. The upper and lower deck will accommodate 4 lanes each hence separating opposite directions.   This non-standard bridge will become a part of St. Petersburg Sea Façade.

On 19 July, the company’s directors inspected the progress of works on site. On 22 July a technical excursion was arranged for top managers of the sectoral companies, Maurer AG and Mostostroy-11. During the excursion General Director of Stroyproekt Aleksei Zhurbin told the guests about the project and novel solutions applied. The guests could see the deck launching operations. An incremental launch is a method of building a complete bridge deck from one end of the bridge only. This method allows erecting large spans with lower labour intensity.

The WHSD Central Section includes also two cable-stayed bridges over the Korabelny and Petrovsky Fairways. The Contractor is now erecting closing spans above the fairways. The deck segments are delivered by barges.

The WHSD is the largest transport infrastructure PPP project in the world and one of the largest construction projects implemented now in Russia. The project received numerous awards from the industry and leading international and Russian economics journals such as Project Finance International, Project Finance Magazine, World Finance, Infrastructure Investor and others. In the experts’ view, a 2 km-long bridge over the Sea Channel in St. Petersburg will be among the Top-20 of the world’s unique bridges.

The main Designer of the project is AO Institute Stroyproekt.