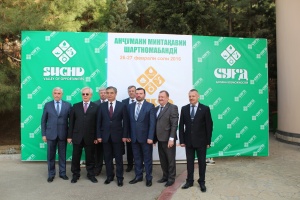 In February 2016, the delegation of Stroyproekt visited Dushanbe, Tajikistan. The programme of visit included a meeting with the Vice-Prime Minister of Tajikistan Mr. Azim Imbrohim and the Minister of Transport Mr. Sherali Gandzhalzod. The meeting was organised to discuss strategic cooperation for implementing large design and construction projects in the field of transport infrastructure of Tajikistan.
Discussions on prospects of cooperation were also held at the Regional Forum “Sughd 2016” that took place on 26 and 27 February in Khudjand. The forum was organised by the Administration of Sughd Region with the support of Eurasian Development Bank and Russian Trade Mission in Tajikistan.

At the plenary meeting, our specialists made a presentation on capabilities of Stroyproekt Engineering Group and expressed interest in implementing transport infrastructure projects in Tajikistan.
They also met Mr. A. Yakubi, the Vice-Chairman of Sughd Region. The Administration of Sughd Region suggested cooperation in transport planning (in particular, for a new town Saikhun), and also for designing and constructing a new government thoroughfare Kayrakkum – Chkalovsk airport and a 42km- long motor road with a bridge over the Syr Darya River next to the Uzbek border. At the final session the parties signed a Memorandum on Cooperation between Stroyproekt Engineering Group, International Transport Academy and the Sughd Region Administration.