Winners of “Dream up a New Bridge” Competition Announced 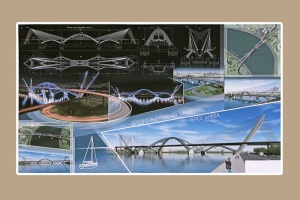 The results of a creative competition “Dream up a New Bridge” were announced at the conference “Road and Transport Sector Sustainable Development: Innovations and Anti-Crisis Measures” dedicated to the 25th anniversary of Stroyproekt. The competition was held among the senior secondary school pupils and university students of St. Petersburg who presented their designs, prototypes, 3D models, computer graphics and pictures.

The first prize was awarded to the team of students of St. Petersburg State University of Architecture and Civil Engineering: Dmitriy Borovskiy, Ksenia Vedernikova and Anastasia Kozhina for their project of an arch cable-stayed bridge across the Neva River.

The second prize was awarded to the Green Free Bridge Project by Anton Ganzha, a student of the Peter the Great St. Petersburg Polytechnic University.

A team from the same University composed of Elena Perlova, Veronika Zamanova, Maria Platonova and Ksenia Rakova, won the third prize for the project “The Bird of Happiness”.
We are pleased to congratulate the winners and thank everybody who took part in the competition.