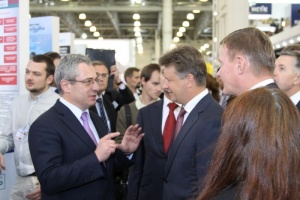 The Road Exhibition was opened on 13 October. The opening ceremony was attended by Maksim Sokolov, Minister of Transport of Russia, Roman Starovoit, Head of Federal Road Agency, Pyotr Ivanov, Deputy Chairman of the Moscow Region Government and Sergei Kelbakh, Chairman of the Board of State Company Russian Highways (Avtodor). The exhibition was supported by Russian Ministry of Transport, Federal Road Agency and Avtodor.

The speakers greeted exhibitors and visitors and congratulated them on the Professional Day of Road Worker, and wished them success and new professional achievements.
Stroyproekt being a renowned leader in the road industry has traditionally participated in the exhibition. At the joint stand of RODOS Non-Commercial Partnership of Road Designers, our company presented videos showing our major ongoing projects such as Western High Speed Diameter with its unique bridges, the Malaya Neva Bridge at Serny Island, both in St. Petersburg,  and the Irtysh River Crossing in Pavlodar, Kazakhstan and also the completed large-scaled projects – Bugrinsky Bridge in Novosibirsk, the transport infrastructure for Olympic Sochi and the Bolshoi Obukhovsky cable-stayed bridge that is part of St. Petersburg Ring Road.
M. Sokolov and R. Starovoit toured the exhibition to see a wide range of products and services of road construction and engineering industry displayed by the participants.
A. Zhurbin, General Director Stroyproekt, told the high officials about the use of PPP mechanisms for large regional projects such as Khabarovsk Bypass and the Ob River crossing at Ippodromskaya street in Novosibirsk and the company’s plans for the future, and invited them to the festivities for the 25th anniversary of Stroyproekt that would take place in November this year.